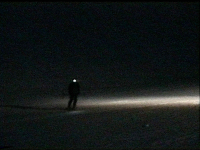 Rika Krithara's video installations in recent years have depicted the urban landscape and its inherent conflicts, but primarily the natural environment, the mountains and the particular demands of survival on them. Her preoccupation with the shapes and patterns made by mountain peaks and the outlines they create on the picture plane has comprised her personal poetics. Her essential concern, both on an aesthetic and conceptual level, is to expose and try to understand her own internal and external limits.

In Exile 2004, her video for Athens by Art, installed on the Ermou promenade, a wavy transparent construction with sharp edges was receptacle of her new images. Her aim was to break up the projection in multiple angles.

Her images created an oneiric environment, white, hazy and infinite like snow in which blurry, solitary figures seem to inhabit a strange land prevailed over an unnatural whiteness. Interspersed were nighttime shots that also contained traces of living beings in this empty, white, fluid place.

Dominant were black-and-white-images resembling strokes of India ink, “like Japanese drawings that depict a poetic environment you want to inhabit”, Krithara says.

Whiteness is not a new element for Krithara. New, however, is this dreamlike distortion and hazy fluidity with forms dissolving into something like a desert or like water. In earlier projects, such as her solo show Tracing, or Gorge (both 2002), her images were more distinct, more realistic and often more descriptive. In Exile, the artistic factor outweighs the descriptive and thematic. She has rendered a dream by abstracting and converting the mountain through a schematization in space.