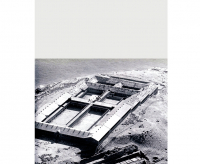 From 1947 until 1953 the island was used as a space of confinement and exile or political left wing prisoners, who had participated in the Greek Resistance.

The prison island was used again during the years 1957 to 1964 and during the Colonel’s Junta of 1967-74 and it has been inhabited ever since.
The island has been declared a protected historical site in 2002.

The removal of human beings from the island has resulted in nature
reclaiming the space. It has been integrated into the official "Natura"
network of protected natural sites in Greece.