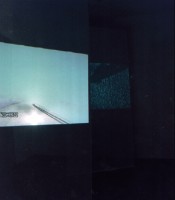 Mirror fugue is a fugue, or rather two fugues, one of which is the mirror image of the other. It is as though a mirror were placed above or below an existing fugue, producing inversions of each interval in each part, as well as inverting the position of the parts within the texture, so that, for example, the topmost part in one fugue is inverted to produce the lowest part in the other. This is well demonstrated by the two four-part fugues of Contrapunctus 12 in The Art of Fugue.

The Art of Fugue (or The Art of the Fugue, original German: Die Kunst der Fuge), BWV 1080, is an incomplete work of unspecified instrumentation by Johann Sebastian Bach (1685–1750). Written in the last decade of his life, The Art of Fugue culminates Bach's experimentation with monothematic instrumental works. It consists of 14 fugues and 4 canons, each using some variation of a single principal subject, and generally ordered to increase in complexity.