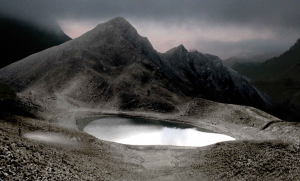 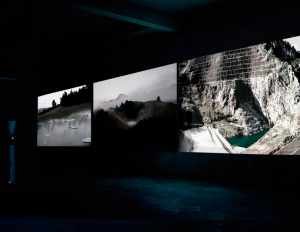 Mountains, a Timeline of
3channelvideo, 2019
.
.
A project on the fragility of ecosystems in Epirus
.
.
On show at the exhibition for the 30th anniversary of the Averoff Museum in Metsovo featuring works by 64 Greek artists
The exhibition is curated by art historian and National Gallery curator, Dr Lina Tsikouta-Deimezi

For this exhibition, Rika Krithara has produced three videos, consisting of different shots and mountain lake landscapes. The artist is especially fond of Zagori and the mountains of Pindos and Metsovo.

She engages with places she has loved for long, and highlights the deterioration of nature, the lost waters, and the damage caused by humans. She implicitly raises the issue of climate change. She is very alarmed in the fact that an investigation has been launched into the signing of contracts for hydrocarbon research and extraction in Epirus.

These three videos are viewed side by side, which is conveying the magic of nature through bird's eye views of different landscapes in conversation, or sequentially.

On the left is a mountain Lake Flega, above Metsovo, which gradually dries up. The so called drakolimnes (dragon lakes) are lakes at a high altitude in the mountains, some perennial, some seasonal. The lost water is crucial for the landscape.

The artist is in awe before the mountains, which are her creative obsession. in her 2002 work for the Averoff exhibition, she also engaged with mountains, producing a large scale installation titled Ravine, a double projection on two screens forming a narrow, claustrophobic passage.

In her new video, the lake begins to fuse with the mountain; it is sad to pass by a dried up lake, which vanished before there was time to realise it. The vanishing lake, the melting ice, the animals that are lost.

In the middle video, a distant shot of sky, mountains, and lake in the centre. A fictional vanishing lake constructed by Rika. The artist's addition is an image that is not identifiable.

The video on the right is a closer view of a wounded mountain: a dam, a human intervention, a blatant, brutal intervention to the ecosystem.

Krithara's subject is one of sadness for the destruction of the planet caused by humans. These videos are characteristic of the artist's unmistakable style of landscape videos - faint landscapes that captivate viewers, enveloping them in the form of an art environment.