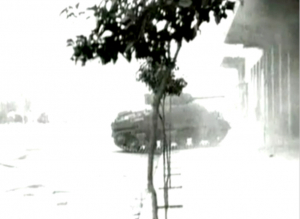 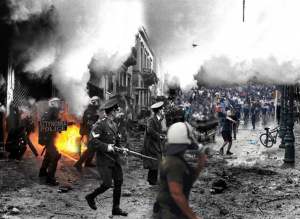 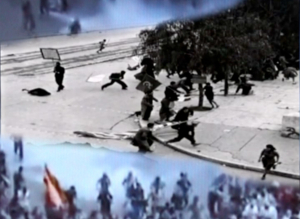 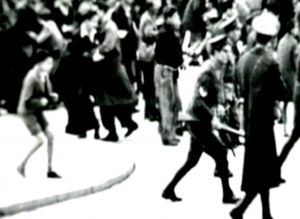 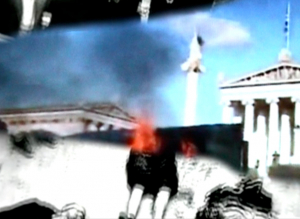 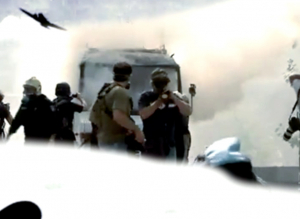 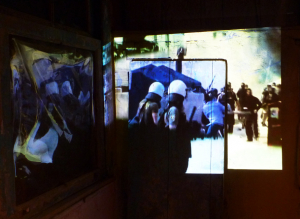 Combined archived documentaries from december's 1944 killings of Greek citizens with documentary shots of riots on the same specific parts of the centre of Athens, near Syndagma square, 2011-13.

The Dekemvriana (Greek: Δεκεμβριανά, "December events") refers to a series of clashes fought in Athens from 3 December 1944 to 11 January 1945 between the Greek left-wing Resistance forces (EAM-ELAS, KKE) and the British Army supported by the Greek Government, the Cities Police and the far-right Organization X of Georgios Grivas ( X was pure anti-communist. But its relations to the occupying power were ambivalent. The organisation was tolerated and armed by the Germans, and even before the German departure fortified a base near the ancient temple of Thiseion. Towards the end of the Occupation, X received arms from British sources with which its members fought in the Dekemvriana clashes of December 1944.).

The conflict was the culmination of months of tension between the left-wing EAM-ELAS, the country's largest resistance movement which controlled most of Greece, and the British-backed government, which had returned from exile upon the Germans' withdrawal in October 1944. Although EAM had initially participated in the government, mounting differences with the traditional bourgeois parties led to the resignation of its ministers. On 3 December, a huge pro-EAM rally in central Athens was shot upon by the Police on orders from Angelos Evert, leaving 28 protesters dead 148 wounded. The killings ushered a full-blown armed confrontation between EAM and the British, under General Ronald Scobie.

The clashes were limited to Athens, and elsewhere in Greece the situation remained tense, but tranquil. The Dekemvriana ended with the defeat of EAM-ELAS, leading to its disarmament in the Varkiza Agreement. This first defeat broke the power of EAM, and was followed by a period of "White Terror" that contributed to the outbreak of the Greek Civil War in 1946.

The 2010–12 Greek protests were a series of demonstrations and general strikes taking place across Greece. The protests, which began on 5 May 2010, were sparked by plans to cut public spending and raise taxes as austerity measures in exchange for a €110 billion bail-out, aimed at solving the 2010–2011 Greek debt crisis. Three people were killed in the protests of 5 May, one of the largest in Greece since 1973.

On 25 May 2011 (2011-05-25), anti-austerity protestors organized by the Direct Democracy Now! movement, known as the Indignant Citizens Movement (Greek: Κίνημα Αγανακτισμένων Πολιτών, Kínima Aganaktisménon Politón), started demonstrating in major cities across Greece. This second wave of demonstrations proved different from the years before in that they began through peaceful means. Sparked by the 2011 Spanish Protests, these demonstrations were organized entirely using social networking sites. The demonstrations and square sit-ins were officially ended when municipal police removed demonstrators from Thessaloniki's White Tower square on 7 August 2011.

On 29 June 2011, violent clashes occurred between the riot police and protesters as the Greek parliament voted to accept the EU's austerity requirements. Accusations of police brutality were reported by international media such as the BBC, The Guardian, CNN iReport and The New York Times as well as Amnesty International. The Athens Prosecutor agreed to an investigation into accusations of excessive use of tear gas, as well as the alleged use of other expired and carcinogenic chemical substances. The investigation is currently under way.